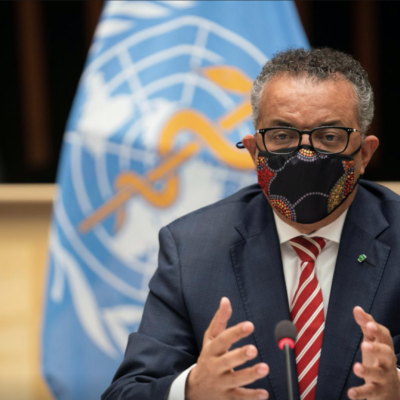 “I am pleased to announce today that 184 countries have now joined COVAX. The most recent countries joining over the weekend are Ecuador and Uruguay,” World Health Organization (WHO) Director-General Dr. Tedros Adhanom Ghebreyesus said at a press conference held at WHO’s headquarters in Geneva, Switzerland, using video conferencing.

Stating that Ecuador and Uruguay recently joined the program, Ghebreyesus underlined that COVAX is the largest global platform for the potential Covid-19 vaccine and stated that the aim of the program is to distribute an effective and safe vaccine to the whole world.

Stating that the Covid-19 epidemic has “entered an alarming stage”, Ghebreyesus said, “As the northern hemisphere enters winter, we’re seeing cases accelerate – particularly in Europe and North America. As winter comes we know that the next few months will be tough.” he spoke.

Stating that the leaders of many countries are pleased with the measures taken to slow the spread of the virus and protect healthcare workers and health systems, Ghebreyesus stated that as the number of cases increases, the need for beds in hospitals and intensive care units also increases.

“Nurses and doctors have a much better understanding of how best to treat people with the virus than they did in the early days of the pandemic. However, when hospital capacity is reached and exceeded, it is a very difficult and dangerous situation for both patients and health workers alike. So it’s important that all governments focus on the fundamentals that help to break the chains of transmission and save both lives and livelihoods. “

The WHO Director-General noted that the basic principles in question are the detection of active cases, cluster research in regions where the virus is prevalent, isolation of all cases, quarantine of contacts, good clinical care, support and protection of healthcare professionals.

At the meeting attended by the American singer Kim Sledge, who became famous with the song “We Are Family”, Ghebreyesus repeated her call for global solidarity and national unity, “As Kim said we are one big global family.” used the expression.

Sledge said he was delighted to participate in the “We Are Family” campaign to promote global solidarity and cooperation against Kovid-19.