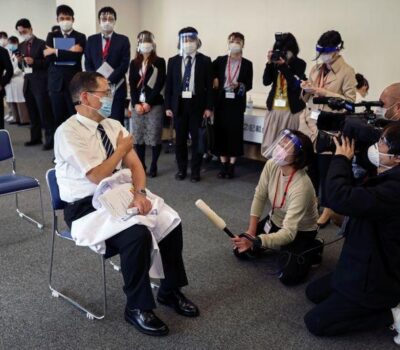 (Reuters) – Here’s what you need to know about the coronavirus right now:

The United States on Monday crossed the staggering milestone of 500,000 COVID-19 deaths just over a year since the coronavirus pandemic claimed its first known victim in Santa Clara County, California.

About 19% of total global coronavirus deaths have occurred in the United States, an outsized figure given that the nation accounts for just 4% of the world’s population. The country has the highest overall death figure, reflecting the lack of a unified, national response.

The reason the coronavirus variant first identified in the UK is more transmissible than earlier versions of the virus may be that it spends more time inside infected people, giving them more time to spread the virus, according to a small study. Among individuals infected with the variant designated B.1.1.7, the average duration of infection was 13.3 days, compared with 8.2 days in those infected by an older version of the coronavirus.

“The findings are preliminary, as they are based on seven B.1.1.7 cases,” the researchers cautioned in a report posted without peer review on a Harvard University website. “However, if borne out by additional data, a longer isolation period than the currently recommended 10 days after symptom onset may be needed to effectively interrupt secondary infections by this variant,” they said.

Pfizer to ship 13 mln vaccine doses a week to U.S. by mid-March

Pfizer Inc expects to deliver more than 13 million doses of its COVID-19 vaccine a week to the United States by the middle of March, more than doubling its shipments from early February, a top Pfizer executive said in prepared testimony ahead of a Tuesday congressional hearing.

Other drugmakers including Moderna and Johnson & Johnson also said they intended to boost shipments, putting the United States on track to receive 240 million doses by the end of March and 700 million doses by mid-year, more than enough to dose the entire U.S. population.

The World Health Organization has agreed a no-fault compensation plan for claims of serious side effects in people in 92 poorer countries due to COVID-19 vaccines from the COVAX sharing scheme, resolving a big concern among recipient governments.

The programme, which the WHO said was the first and only vaccine injury compensation mechanism operating on an international scale, will offer eligible people “a fast, fair, robust and transparent process”, the WHO said in a statement. Countries funding their own COVID-19 vaccine procurement also plan their own liability programmes.