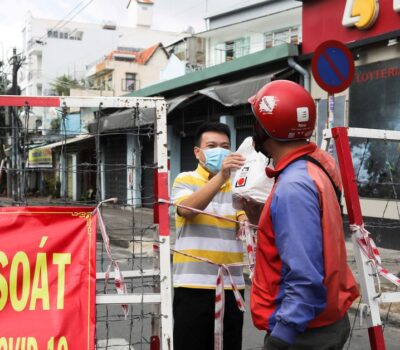 A man living in an area under lockdown receives food through a barricade during the coronavirus disease (COVID-19) pandemic in Ho Chi Minh City, Vietnam July 20, 2021. REUTERS/Stringer

HANOI, Sept 27 (Reuters) – Authorities in Vietnam’s biggest city are urging the government to recognise positive rapid tests for COVID-19 to present a clearer picture of its outbreak, state media reported on Monday, a move that could increase the city’s case total by 40%.

Positive rapid tests of 150,000 people in the city since Aug. 20 have not been included in the overall tally, Tuoi Tre newspaper said, citing the deputy head of the city’s health department, Nguyen Huu Hung.

The health ministry did not immediately respond to a request for comment from Reuters.

Tuoi Tre cited an unnamed official at the city’s health department as saying the 150,000 individuals were being treated, but had not undertaken swab tests due to insufficient resources.

Ho Chi Minh City is set to ease coronavirus curbs and allow the resumption of some businesses from Friday to try to revive economic activity after long periods of restrictions. read more

The move is part of a shift away from its policy of targeting zero-COVID-19 cases, which was pursued aggressively prior to April this year, when it was hit by a devastating wave of infections fuelled by the highly contagious Delta variant.