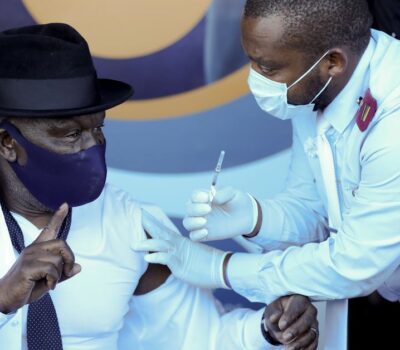 JOHANNESBURG, July 21 (Reuters) – South Africa aims to have given at least one dose of COVID-19 vaccine to 35 million of its 60 million people by Christmas, a senior health official said on Wednesday.

The Department of Health’s Nicholas Crisp added during a briefing to a parliamentary committee that roughly 25,000 vaccine doses had been either stolen or destroyed during riots last week.

The country is the worst affected by the coronavirus pandemic on the African continent in terms of recorded infections and deaths, and is experiencing a “third wave” of infections.

Its vaccination campaign started slowly due to a mix of bureaucratic failures, bad luck and onerous negotiations with pharmaceutical companies. But the pace of vaccinations has ramped up in recent days, and health department data showed on Wednesday that over 250,000 vaccinations had been administered in the past 24 hours. read more

To date, South Africa has administered around 5.8 million doses of the one-dose Johnson & Johnson (JNJ.N) and two-dose Pfizer (PFE.N) vaccines.

“We will be able to have vaccinated – at least one dose – 35 million people before Christmas. That is the target that we have set and that we are chasing”, said Crisp, who is overseeing the country’s vaccination programme.

He said the loss of vaccine doses during looting and arson last week that followed the jailing of former president Jacob Zuma “was not huge but every lost vaccine is a lost opportunity”.

Officials expect there will be a “second hump” in the ongoing third wave of infections because of the riots, he added. “We don’t know how big it will be, … but it should be probably within seven to 10 days after people were milling around together and transmitting the virus”.

South Africa has around 15 days of vaccine doses left in stock. But it is confident it can continue to scale up vaccinations and will not run out of doses as “for the first time we have line of sight of a lot of vaccine from now until the end of October”, Crisp continued.