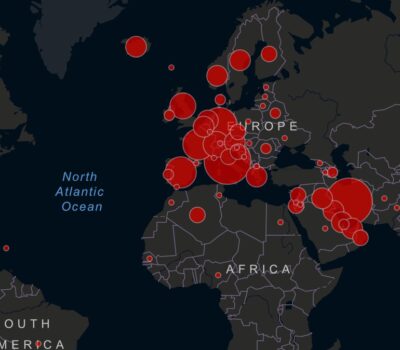 Tedros Adhanom Ghebreyesus, head of the World Health Organization, said, “oo many countries are seeing an exponential increase in Covid-19 cases and that is now leading to hospitals and intensive care units running close to or above capacity – and we’re still only in October.”

The message was shared by the European Center for Disease Prevention and Control (ECDC), whose director Andrea Ammon spoke of the “highly concerning epidemiological situation.”

The Robert Koch Institute, a federal government agency, recorded a total of 10,003 coronavirus deaths in Germany, where 14,714 new cases were diagnosed in the last 24 hours.

Lothar Wieler, head of the institute’s disease control authority, said the country is facing a very serious situation. Chancellor Angela Merkel told citizens in a weekly video podcast that “the turn of the day is to reduce contacts, meet as few people as possible.”

Johns Hopkins University reported 79,963 new US cases within 24 hours, a record, but the number of daily deaths has remained largely stable between 700 and 800 since the beginning of autumn.

Polish president Andrzej Duda tested positive and added another name to the list of leaders diagnosed with the virus. Besides the diagnosis, 48-year-old Duda is believed to be in good general health.

Hundreds of protesters in Naples fired bullets and set fire to trash cans during a demonstration against restrictions in the southern Italian city late Friday.

A mostly young crowd walked the streets of the regional capital and chanted slogans at 23:00 in the Campania region when the curfew began. Some protesters lit smoke bombs.

The British government announced a £ 75 million rescue package to save the 35 cultural institutions hit by the pandemic, including the Globe Old Vic theaters in London.