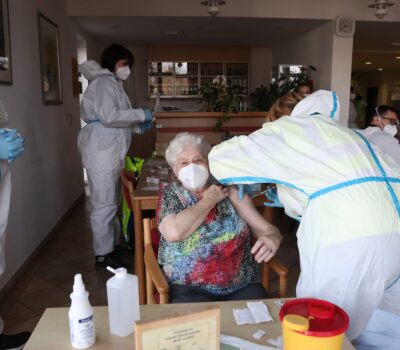 Swiss drugs regulator swissmedic on Wednesday said it saw no link between the death of a 91-year old person in the canton of Lucerne and the COVID-19 vaccine, adding the deceased suffered from multiple illnesses before getting the shot.

“Clarifications by cantonal health authorities and swissmedic determined that, as a result of the illness history and disease course, a link between the death and the COVID-19 vaccine was highly unlikely,” the regulator said in a statement.

Swissmedic said previous diseases would be listed as the “natural cause of death” on the death certificate.

Lucerne was the place where the first vaccinations were given in Switzerland last week, with a shot given by Pfizer and its German partner BioNTech primarily to the elderly.

Switzerland has received 107,000 Pfizer / BioNTech doses so far and expects to receive 250,000 doses per month from next year.

Neither Lucerne nor swissmedic released the time between the person shot and when the death occurred. The gender of the person is not given.

Pfizer and BioNTech’s vaccine is so far the only vaccine approved in Switzerland. It was approved on an emergency basis in the United States and the UK and, after trials in tens of thousands of people, gained conditional marketing approval in the European Union.

Pfizer said his thoughts were with the deceased’s family.

“It is important to note that serious adverse events, including deaths that are unrelated to the vaccine, are unfortunately likely to occur at a similar rate as they would in the general population of elderly and at-risk individuals who are currently being prioritized for vaccination,” the U.S.-based company said.