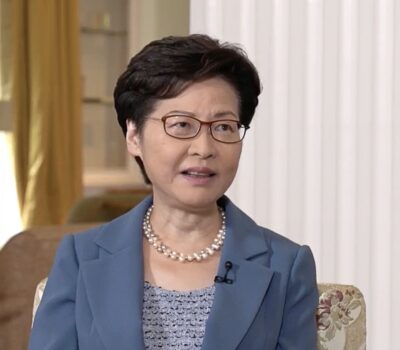 The government will implement the plan in the coming weeks after passing the subsidiary legislation under the Disease Prevention and Control Regulation.

“We need to take a targeted approach,” Lam said, adding that she does not suggest that every individual in Hong Kong should be tested.

“As we learned in the Universal Community Testing Program (UCTP), it has to be affordable,” Lam said at a weekly press conference. According to the chief executive, the program will focus on people with symptoms, those involved in minor outbreaks and high-risk situations.

Asked about potential human rights issues, Lam said the government would take a “balanced” approach. “If you want people to accept the mandatory test, you have to convince them that it is done with maximum effectiveness.”

She said the authorities have the power to restrict citizens’ freedoms in the context of a public health crisis. “When dealing with public health issues… sometimes the government needs to be firm and determined.”

Lam also announced the launch of a voluntary Covid-19 monitoring app for Hong Kong, which will be available within the week.

The chief executive has called on restaurant and fitness center operators, as well as taxi drivers, to download the app to help the Health Protection Center better monitor sources of infection in the community.

Lam also announced that beaches that have been closed since the end of July will reopen: “[I] afternoon, announcements will be made about the opening of beaches so that the public can use the warm weather to go. for swimming.”

Hong Kong reported eight new cases of infections on Monday, all of which were imported. The total number of infections in the 7.5 million city is 5,303 with 105 deaths. -hongkongfp-