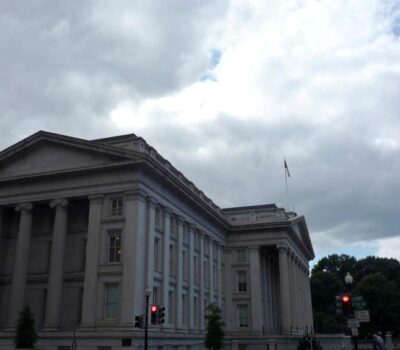 NEW YORK (Reuters) – Foreign outflows in Treasuries hit their highest in more than two years in February, according to data from the U.S. Treasury released on Thursday, as investors sold government debt on expectations that yields would go higher as the economy emerged from the pandemic.

On a transaction basis, foreign investors sold $65.46 billion in Treasuries in the month, the largest outflow since December 2018, compared with outflows of $49.13 billion the previous month. Investors have sold Treasuries in nine of the last 12 months.

Foreign holdings of Treasuries overall declined to $7.098 trillion in February, from $7.119 trillion the previous month. In January, foreign ownership of Treasuries gained the most in six months.

“A lot of investors may have been nervous about the move in rates and decided to sell on expectations that rates are moving higher,” said Gennadiy Goldberg, senior rates strategist, at TD Securities in New York.

An improving U.S. economy due in part to increased vaccinations pushed yields higher in February and prompted market expectations that the Federal Reserve might raise interest rates earlier than what officials had suggested, which was not until at least 2024.

The Fed stuck to its guns and said no rate hike is forthcoming over the next few years.

Japan led the slide in foreign holdings in February, with $1.258 trillion, from $1.276 trillion in January, which, analysts said, may have been related to the country’s March fiscal year-end.

Japanese investors tend to sell U.S. assets and repatriate those proceeds back to their home country for balance sheet purposes, with the approaching fiscal-year end.

China, on the other hand, raised its holdings of U.S. government debt, with $1.1 trillion, from $1.09 trillion in January.

“There’s a lot of cross-currents. The sell-off has a lot of strong sellers, but also attracted buyers, buying the dip,” said TD’s Goldberg.

Overall, net foreign acquisitions of U.S. long-term and short-term securities, as well as banking flows, amounted to a net inflow of $72.6 billion in February, from a revised $105.8 billion in January.