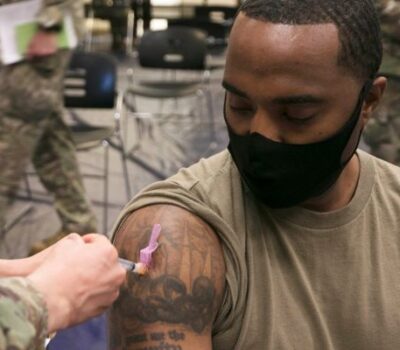 American soldiers deployed in South Korea received the first coronavirus vaccine doses to be administered in the country on Tuesday, as health officials in Seoul reported a daily death record of 40 amid the increase in new cases.

A USFK official said that US Forces Korea (USFK), which includes about 28,500 American military personnel as well as thousands of other workers and family members, gave the first doses to force “frontline paramedics and first responders.”

The United States military began the first wave of COVID-19 vaccines at Japan’s Yokota Air Base on Monday.

Seoul plans to begin its vaccinations in February with healthcare workers and vulnerable people in the first place, but the government has been criticized for this program in light of ongoing vaccines in the United States and the European Union.

President Moon Jae-in argued that the timeline is more than enough in South Korea to achieve herd immunity faster or faster than in other countries.

On Tuesday, Moon’s office said it spoke with Stéphane Bancel, Chief Executive Officer of Moderna Inc, to confirm their plans to sign a deal with a sufficient dose to cover 20 million people from this company.

South Korean officials pledged to accelerate the launch of the vaccination program after detecting the virus variant linked to the rapid increase in infections in the UK.

The Korean Agency for Disease Control and Prevention (KDCA) said it had 1,046 new coronavirus cases as of midnight Monday, bringing the total to 58,725 with 859 deaths. Of the new cases, 1,030 were delivered locally, and more than half were found in Seoul.

Prime Minister Chung Sye-kyun expressed his regret over the mass cluster infection with a total of 757 infections in a Seoul prison and called for total prevention measures.

Authorities have stepped up tests to track potential cases of unknown origin and cases with no symptoms, particularly in the Seoul metropolitan area.

Chung said that in the past two weeks, more than 500,000 tests were conducted at temporary testing centers in the greater Seoul area and more than 1,400 patients were identified.

“We made progress in finding the silent spreaders and preventing the transmission,” Chung told a meeting.

The USFK distributed Moderna vaccines to three military treatment facilities at US bases in South Korea on Monday. South Korea is one of four overseas destinations included in the Department of Defense’s first phase deployment plan.