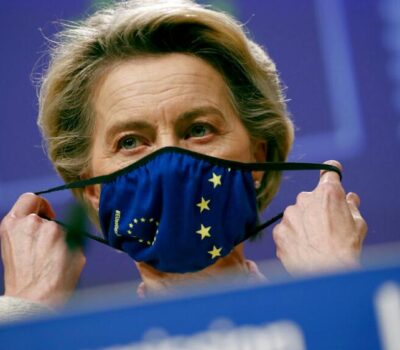 “We decided to take an additional 100 million doses of the BioNTech/Pfizer vaccine, which is already being used to vaccinate people across the EU,” she said on Twitter.

“We will therefore have 300 million doses of this vaccine, which was assessed as safe and effective,” von der Leyen added.

The plan came after some of the vaccine candidates ordered by the EU faced unexpected delays in clinical trials, forcing the bloc and other wealthy countries to rely on shots from fewer manufacturers than originally planned.

Pfizer / BioNTech shots, the first COVID-19 vaccine approved by Western drug regulators, are being launched in countries including the UK and the United States.

EU officials told Reuters in November that, under the EU contract, the two firms pledged to quickly deliver 200 million doses for 15.5 euros ($ 18.8) each, following regulatory approval.

EU officials said the extra 100 million doses will be supplied at the same price, but the timeline will be negotiated.

Pfizer / BioNTech said on Tuesday that all 300 million doses are expected to be delivered in 2020 and 2021.

“The additional 100 million doses will be delivered in 2021, supporting the vaccination campaigns, which started two days ago in all 27 member states,” BioNTech Chief Executive Officer Ugur Sahin said.

The block, which has a population of 450 million, is currently relying on the 200 million Pfizer vaccine it ordered for its first vaccines.

In January, the EU is also expected to approve the shot developed by Moderna. It has an initial order of 80 million doses, and another 80 million doses will be administered.

Both Pfizer and Moderna vaccines require two doses per person. In total, the EU has booked about 1.3 billion vaccines in deals with Pfizer / BioNTech, Moderna, Johnson & Johnson, AstraZeneca / Oxford, Sanofi / GSK and CureVac, and has the option to purchase another 660 million. -reuters-