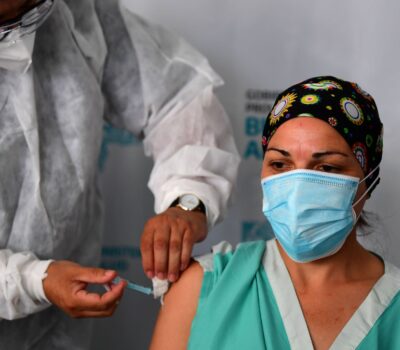 The Argentine media announced that the vaccination program with the Russian vaccine Sputnik V against Covid-19 has started in the country today.

In Argentina, the first country in the Americas to vaccinate with Sputnik V against coronavirus, the vaccination process was initiated in nine regions simultaneously. The vaccine will be administered primarily to healthcare professionals.

In the capital city of Buenos Aires, the Russian vaccine was first administered to Governor Alex Kisilloff, State Health Minister Nicholas Kreplak and a nurse.

The Argentine government previously announced that mass vaccination with Sputnik V will begin in the country on December 29, and the vaccine will be delivered to every province of the country by December 28. On December 23, Argentina officially approved the Russian vaccine.

The Russian Direct Investment Fund (RDIF) reported that a 300,000-dose lot of the planned 10 million dose Sputnik V vaccine supply was delivered to Argentina. “With the delivery of 300,000 doses of vaccine, our partners in Argentina will be able to begin mass vaccination before the end of 2020,” RDIF President Kirill Dmitriyev said.

In addition to Argentina Sputnik V, the American company approved the German BioNTech vaccine with Pfizer.